The Swimmer of the Year shall hold the Trophy for a period of one year subject to the Association’s conditions. The swimmer(s) will receive a personal memento recording the award.

The following are the criteria to be used to select the Warwickshire Swimmer of the Year:

Swimmer of the year

After a winner’s name:

(WP) Water Polo  and (P) a Para Swimmer, all others are speed swimmers

Tully Kearney has a progressive neurological condition that causes advanced weakening of the muscles and painful contractions, as well as having joint hypermobility, which can result in dislocations. Despite her limited independent mobility Tully began swimming at the age of nine, deciding to take up swimming competitively after being inspired by Ellie Simmonds when she displayed her Paralympic medals at a school assembly (they attended the same school). Tully followed in Ellie’s footsteps and joined Boldmere Swimming Club and was subsequently classified as a S10 and SB9 swimmer; at the age of 14 she was competing nationally in youth competitions winning gold in seven events at the DSE (Disability Sports Events) Championships in Sheffield.

In 2015 Tully was selected to represent Great Britain at the 2015 IPC Swimming World Championships Glasgow.

Due to her progressive illness, Tully was reclassified as a S9 swimmer in her butterfly, freestyle and medley events. Qualifying to enter seven events.

Gold in the medley relay,

Silver in the 100m backstroke S9, behind a world record breaking swim by Australia’s Ellie Cole,

Bronze in the 4x100m freestyle relay.

Tully Kearney enjoyed a breakthrough season in 2015 by not only securing her position on the World Championships team but also returning as the most decorated swimmer.

Tully is an exceptional elite athlete and Warwickshire is delighted that she has been included in Great Britain’s main performance squad for the final build-up to Rio 2016 Paralympics. Tully was previously on the ‘podium potential’ programme, but has moved up to the main ‘podium’ group of athletes. She joins the likes of fellow Aldridge pool star Ellie Simmonds, and will receive direct support from UK Sport through the World Class Performance Programme. Nationality 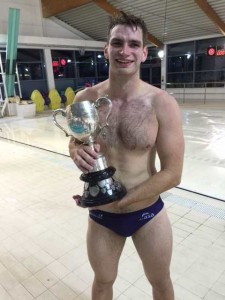 Jake Vincent Swimmer of the Year 2014