The focus of the camps will be to fine tune technical skills in each of the 4 strokes. The swimmers will focus on a different stroke each day within two pool sessions, covering all elements of the stroke including starts, turns, transitions and finishes. Under the guidance of one of City of Coventry Swimming Clubs Senior Coaches, swimmers will also be introduced to Land Training and be given tips on various areas of swimming.

For further details, please visit the City of Coventry website: www.coventry-swimming.org.uk or

The Competition was against 6 other county teams from across the country including Suffolk, Bedfordshire, Hertfordshire, Lincolnshire, Essex County and Leicestershire. The whole evening was an enjoyable experience, with a fantastic opportunity for all involved. Every single one of the 31 swimmers who represented their county swam amazingly well, with several fabulous personal bests and a handful of regional times achieved.

The Gala started off with a convincing win for Annabel Crees (Rugby), Thomas Hudson (Nuneaton), Charlotte Gledhill (Nuneaton) and Dominic Simpson (Nuneaton), who lead from the start of their 10 years mixed 4×50 Freestyle relay beating the competition by over 30 seconds. The evening continued in much the same vain with the team consistently placing with in the top four teams. Other notable 1st place finished included: Thomas Hudson’s (Nuneaton) wins in both his individual races in the 10 years 50m freestyle (31.80) and the 50m Backstroke (37.56), Connie Palmer (Boldmere) also won her 10 years 50m freestyle in a time of 32.44. Erin Davis (City of Birmingham) secured a win in her 13 years 100m Freestyle individual in a time of 1:02.16, while Charlotte Gledhill (Nuneaton) won her individual in the 10 years 50m Backstroke with a time of 38.27 and Finally George Smith (Leamington Spa) Finishing of the individual races with a win in the 13 years boys 100m Breaststroke in a time of 1:13.93. The gala was an overall success for Warwickshire with over 80% of the races seeing the team place 4th or above with these 8 impressive first place finishes enabling to the team to finish in a comfortable 2nd place.

Finally we would like to say a massive thank you to the local teams: Rugby, Nuneaton and Bedworth, City of Birmingham, Boldmere, Blyth, City of Coventry, Leamington Spa, Orion and Solihull who providing swimmers for the event. As well as the Volunteers, Graham Nash (Head Coach from Leamington Spa), Jessica Ford (Coach from Coventry) Joey Stanger (Coach from Boldmere), Elaine Gale (Team Manager from Boldmere), and the officials, Rachel Cutler (Rugby), Andrew Herbert (Leamington),Kerry Hancock (Kingsbury) and Lucy Gale (Boldmere). As well as a huge congratulations to all who swam and represented their County.

The final points tally was:

Team Photo taken before the match. 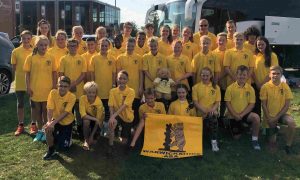 The annual Age Group Inter-county meet at Sheffield was as usual a hard fought event.  The event is run in two divisions with a boom between the two halves of the pool.  With twenty teams competing this can make for a significant amount of noise, even though to keep the poolside clear the teams are up in the gods waiting for their event, rather than on the pool side.

Unfortunately towards the end of the gala the team were pushed back to sixth place as swimmers tired, particularly those who were filling in for some who were unfortunately not available for various reasons.

The team was managed by Ian Carden and coached by Graham Nash who as usual had their hands full.  With several flights of stairs to the poolside, making sure everyone is in place for their race requires careful management and timing.  The team spirit was great helped by the bonding that can occur on the long coach journey to Sheffield from the pick up points in Coventry and Birmingham.

In parallel with the main event, the four West Midlands counties participate in a ‘virtual’ gala.  This is based on the times recorded by each team, because this allows for the possibility that the teams may be in different divisions as this year, where Worcestershire were in Division 1.  Based on four points for first etc, Worcestershire just piped Warwickshire to first place, thereby retaining the trophy they won last year.