Warwickshire ASA – What we are about

For information on the 2020 Championships please go to: 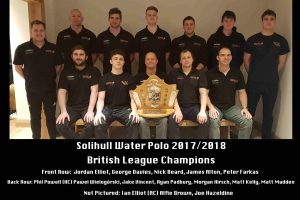 Brian Rainsford of Kingsbury Aquarius has been selected as Volunteer of the Year 2018 for his services to swimming over more than thirty years.

Up from one place last year Warwickshire Masters maintain their record of finishing in the top four for twelve years.  The full results are subject to ratification, but second place is secure.                            The event gets harder each year, evidence of this is that less than 100 points in 1,600 separating the top four teams.  Many thanks to Trevor Clark – Team Manager for his sterling work in persuading the best Masters swimmers in the county to compete.                                  Two of the team, Dan Moore in the 18-24 and Jackie Grace in the 55-59 years age groups both broke the Midlands record in their individual races then swam faster leading off relays than they did in their earlier individuals – unfortunately lead off legs in masters can’t be used for record purposes, but the individual times stand.

It is with very deep regret that the death of John Russell and Peter Washbourne, both past presidents of the Association has to be reported.

He served on the executive of the county association for over thirty years and provided valuable council.  He was a highly respected Referee and assisted in the training of many of the swimming officials active today.

As an ASA ‘friend’ he supported many clubs that were having difficulties and helped them resolve their problems.  His wife Pat – also a Past President of the association pre-deceased him by some years.

His health had declined somewhat and he had not been active on the executive for some time, but still maintained a keen interest and was always available when his advice was sought.

The association extends condolences to his sons and their families.

Peter was also a Past President (2002) and served on the executive for nearly thirty years as the Rules and Handbook Secretary for much of that time, making his last contribution to the 2017 handbook, in his usual meticulous manner, only a day or so before his death.  The succeeding Rules and Handbook secretary will have a hard act to follow.

Peter was always available and served in his own quiet unique way.

He will be sorely missed for his wise council, attention to detail and friendship.  The theme of the tributes sent in is that he was a gentleman.

The association extends their condolences to his wife Leila.

WASA Waterpolo Invitational event to be held in Coventry on 9th September. For information please click the above link

We congratulate all thirty-three swimmers who were selected on their performances across all strokes during the County Championships 2017. (click for full report)